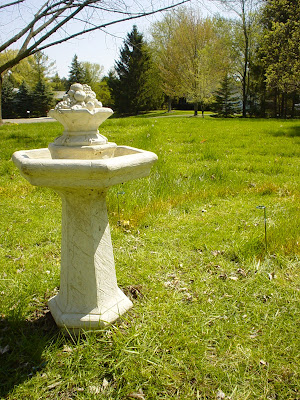 I wasn’t sure what I’d find when the snow melted last month. I trudged around in the mud a little and it seemed like there might be enough information left in the labyrinth, that I wouldn’t have to start over from scratch. I never anticipated that I’d be able to re-use the layout from the year before, but it seemed like it might be possible.

By this past weekend the ground had dried enough so I could get out there and take a look around. I got out the little 18-inch push mower and thought I’d just start at the beginning and see if I could mow a path through the leaves and debris. Hopeless confusion soon put that idea to rest. Since I didn’t want to risk cutting across grass path boundaries, I put the mower away and decided I needed to mark what I could see of the paths and go from there.

I bought some paint at Home Depot. I meant to buy inverted marking paint, but I purchased striping paint instead. The only difference, I think, is that the striping paint has a type of nozzle made to use with a striping machine.

I discovered this yesterday when I got back into the labyrinth. The paint was difficult to dispense using my fingers, but I used it anyway. I intended to start painting obvious paths and then using my labyrinth drawing, fill in the gaps. This was easier conceived than executed, but eventually – with a few trials and errors -- I had roughed in the paths. I walked into and out of the labyrinth to test the route, and got out my mower to try again. This time it worked better, although I must say the paths have a somewhat more morphic quality to them than their previous geometric precision.

Then I got out the paint again and filled in the gaps and straightened some lines and generally gave the labyrinth a little more definition. I plotted the petals in the center of the labyrinth, painted them, and mowed them. I replaced the winter turn markers with the glass balls in copper mounts that I bought last year and straightened and repositioned the markers I used for the entrance turns and the petals in the center. (I used green metal flower stakes for this.)

I got out the rake and began to clean up the winter leaves and debris. This is an ongoing job, but I make a good start. After I cleaned up the debris, I made a final foray with the paint to establish lines that got partially raked away. I also redefined the turns with paint and spruced up the entry with straight lines and a spiral starting spot.

Finally, I installed a little birdbath/fountain that I bought several years ago, instead of my red herb-planter from last year. I think the sculpture fits the space a little better and I like it – at least for now.

So! The labyrinth is ready to use. I’m a little surprised myself that it was so easy to rebuild. I’m pretty happy to see it again after the long, cold winter. 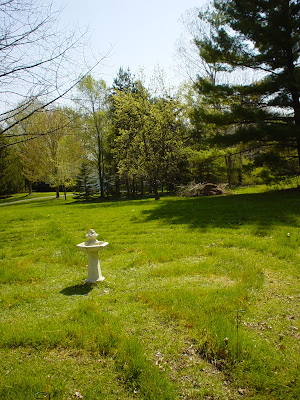 I bought some more paint -- the marking paint, this time -- to spruce up the paths when I'm done with raking. I also bought some grass starter mix to patch the baldish spots once it warms up a little more, and some wildflower mix that I thougth I might broadcast and see what happens.