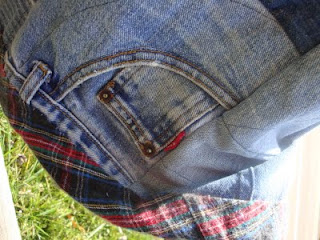 I wanted to make a "manly" quilt of my husband's favorite fabrics -- worn denim and soft, old flannel and I wanted it "sofa" sized because that is where he naps. I thought I had enough old blue jeans and flannel shirts and bathrobes around the house to do it which appealed to my frugal leanings.


No batting needed
Virginia had told me not to put in batting as it would be too heavy and I took her advice.

I cut 8 x 8-inch squares of denim, using all the parts of blue jeans that were salvagable including the pocket parts, both front and back.  I had various colors of blue including some striped. I backed them with flannel, about five different varieties, all plaid. I sewed flannel and denim squares together differently depending on what the denim was like and according to my whims. Many were with an X, some followed the pattern or seam of a pocket, some with a square and one with a heart.

When I had enough squares for five rows across and nine down I laid them out trying to make both sides very random -- no two of the same plaid next to each other and the various quilting designs scattered. When I was satisfied, I sewed the long rows together. It was then I realized that if I continued, and sewed these long rows to each other, the corners of each square would be so thick I would burn out my machine.


Offset seams
So I made five "half" squares and put them alternately on the top of one row and the bottom of the next so the blocks would be off-set. Then I sewed the long rows to each other and it worked!

I wanted to bind the edges, but I had run out of flannel. Luckily I found a big, plaid flannel skirt on the sale rack at the Goodwill Store in St. Marys where my daughter lives. I took it all apart and it gave me more than enough fabric to cut four-inch, bias binding that I sewed on. After snipping the raw edges and washing and drying -- DONE!  It "only" took about nine months from start to finish! 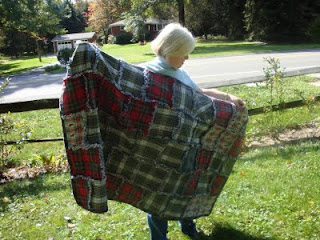 Janet D. and the "manly" quilt

Note from Linda: Directions for another quilt made in this quilt-as-you-go style can be found at Ragged Hearts Quilt: http://appletondance.blogspot.com/2009/02/ragged-hearts-quilt.htm